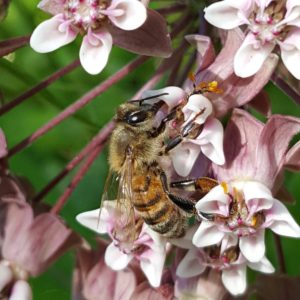 European honeybee on common milkweed at the Nature Center at Shaker Lakes. Photo by Ashley Hall.

Bees. How awesome are they? We love them and their fuzzy little bee butts. Even if you aren’t the biggest fan of bees, we grow up eating mass amounts of food produced by them. We see them everywhere in the summertime, but what’s their story?

The European honey bee (Apis mellifera) was one of the first domesticated insects (mainly because people loved honey so much). The other? The silk moth (Bombyx mori). According to research published in 2015, bees were first domesticated in Anatolia (Asia Minor) at least as long ago as 8,500 years. One Stone Age site in southeastern Turkey called Çayönü Tepesi, yielded exceptionally well-preserved beeswax residue from a pot made in that time period, according to the study. Delicious honey seems to be a product that always has been sought out by humans once we discovered it.

With human assistance, the European honey bee can now “bee” found on every continent with the exception of Antarctica (it’s just too cold). Because of our love for bees and their products, this species is the single most important pollinator for agriculture globally. Bees pollinate a whopping 15 billion worth of U.S food crops. One-third of human diet comes from pollinators, including native wild bees and other animals according to the U.S Department of Agriculture.

Here in Ohio, the European honey bee is an extremely common bee to see, but there are – wait for it – 3,999 OTHER bee species living in North America, most of which are solitary, stingless, ground-nesting bees that you’ve never heard of! There’s a whole world of amazing bees out there that are green, blue, live on their own, feed their offspring leaves, and more!

Next time you’re out for a walk or visiting our Nature Center, take a closer look and see if you can find some of these other BEE-auties. Pun intended.

To learn more about the current state of bees, read up on the University of Maryland’s most recent research from 2019.

Widespread exploitation of the honeybee by early Neolithic farmers

OSU Bees and Wasps of Ohio