Birds migrate and mammals hibernate, but what about frogs?

When the cold air arrives and the first snowflakes start to fall, how do wood frogs weather the weather?

Chances are, if you’ve walked Stearns Woodland Trail, you may have seen one (or many!) frogs jump into our seasonal vernal pool. Living quietly in the forests around us is a world of incredible amphibians. Frogs are a common sight around streams in Ohio, but like many organisms in nature, take a deeper look into the biology of the animal and the tiny become the mighty. Meet the wood frog, Lithobates sylvaticus. These remarkable, local amphibians are able to withstand the freeze-thaw cycle of our Midwestern winters, baffling biologists for years. This tiny frog is able to freeze up to 60% of its body. They don’t breathe, their heart stops, and their blood doesn’t flow.

How are they able to stay alive? Buckle up for the science. 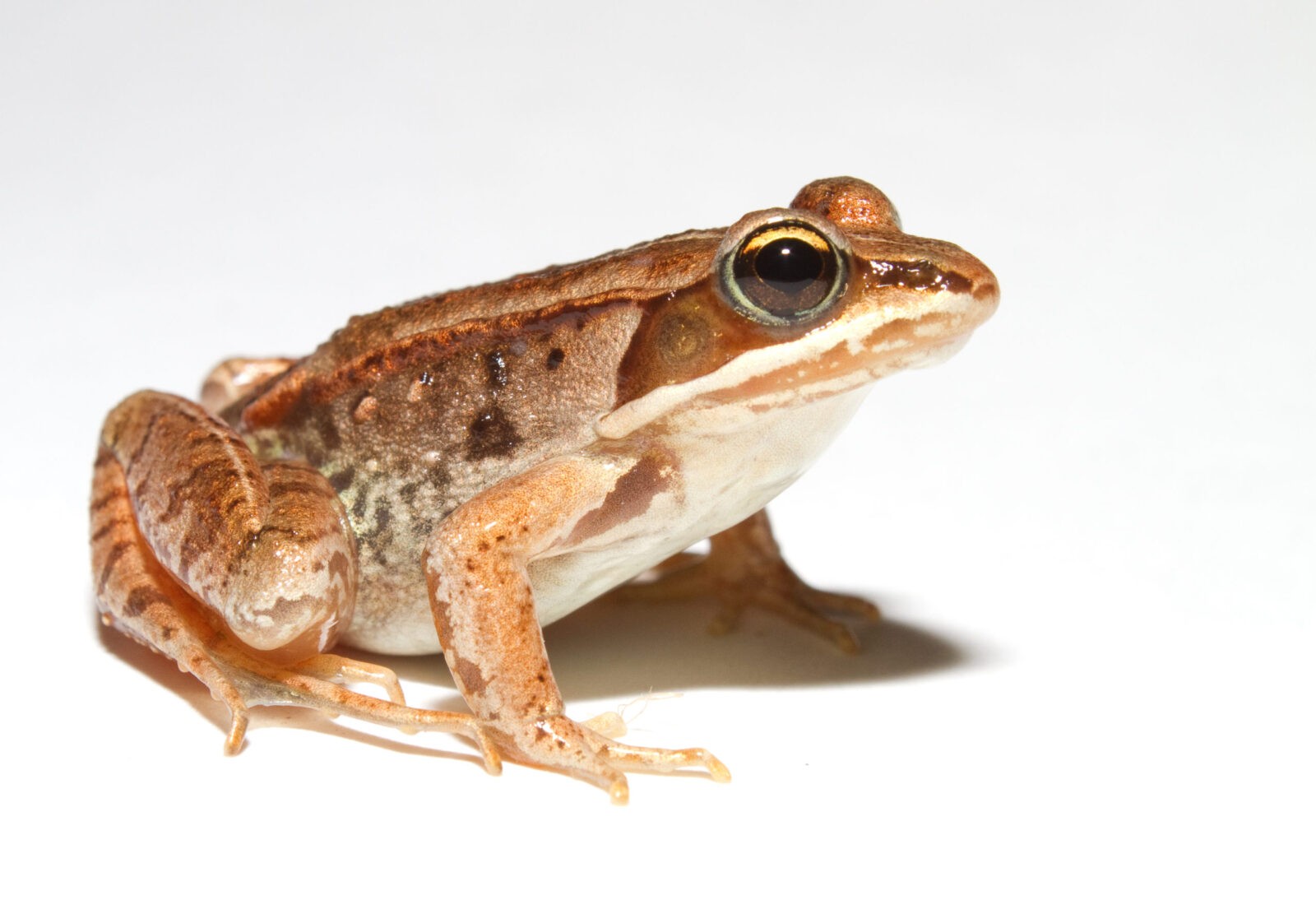 While subzero temperatures would kill most animals, the wood frog (Lithobates sylvaticus) can survive freezing conditions for months without eating or releasing waste. How do they do this? By holding their pee! Scientists from Miami University of Ohio discovered that urea from wood frogs’ urine is able to be recycled throughout their body. During the wood frog’s hibernation, cryoprotectants inside of the frogs’ bodies, act like antifreeze, preventing ice crystals from forming inside their cells by lowering the body’s freezing point keeping their cells and tissues from freezing and bursting. If you were to find a hibernating wood frog, it would appear dead, cold, frozen, and stiff. Bend a leg and it would most likely break off. Up to 60% of their entire body freezes during cold winters. 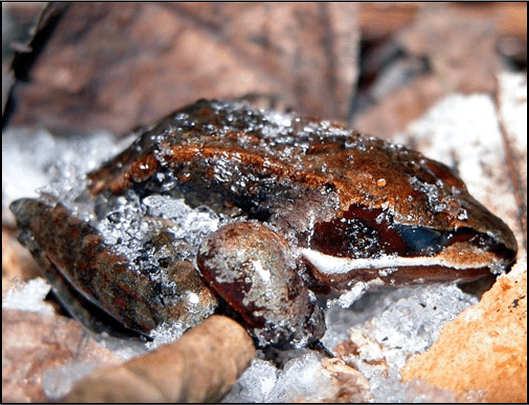 Without protection, our fragile human skin can get frostbite in subzero temperatures in as little as 15 minutes, but wood frogs don’t. Why? Researchers have discovered that frogs don’t freeze once and stay frozen. Instead, they spend a week or two freezing at night and thawing during the day until the temperatures drop permanently below freezing. This freeze-thaw pattern may help the frogs convert more of the glycogen stored in their liver into glucose. It is the high levels of glucose in the frogs’ cells that keeps them alive and frostbite free throughout the winter. 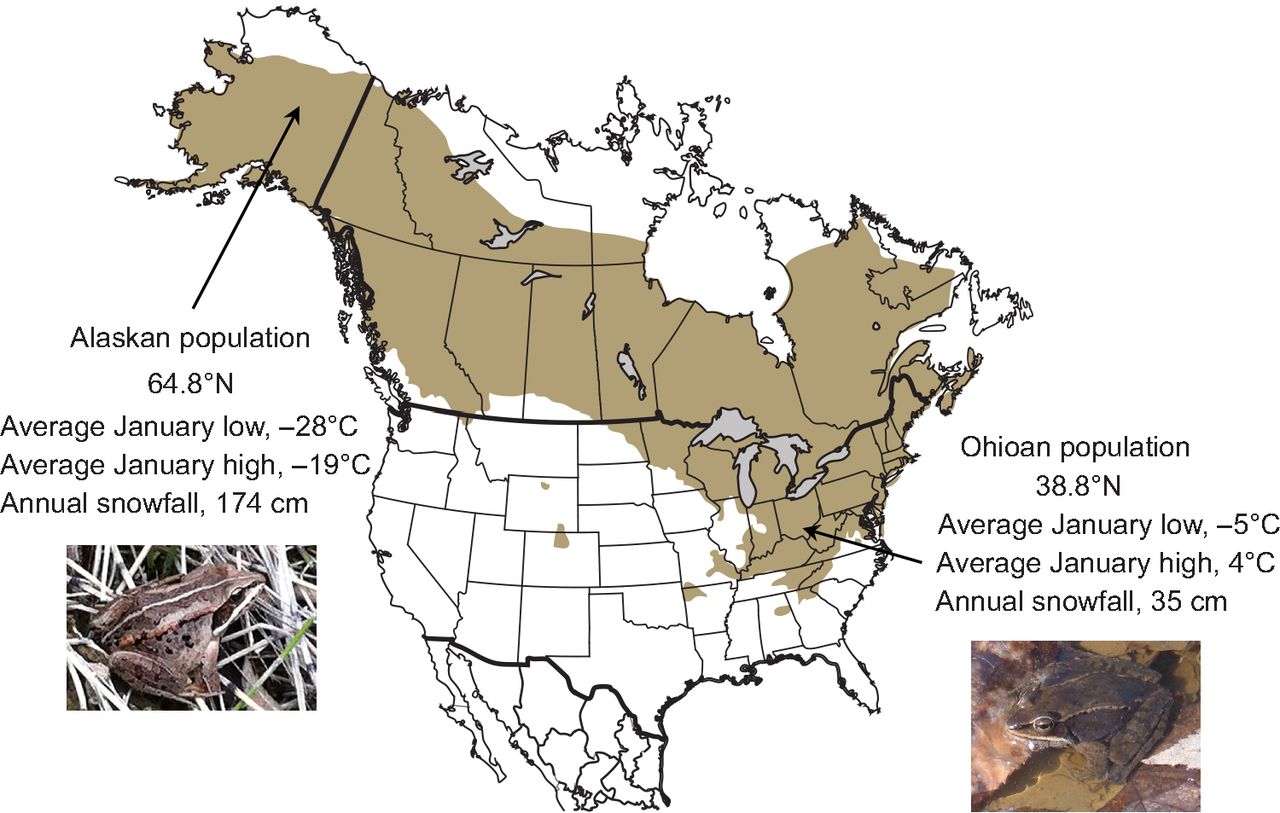 Figure from Costanzo et. al 2013. Geographic range of Lithobates sylvaticus (shading) and sources of animals used in the study, with key climatic variables of the collecting locales.

When the weather warms and the ice and snow start to melt, so do the frogs. Studying the frogs’ ability to adapt in extreme temperatures and come out unscathed will lead to scientific breakthroughs in the human medical field. Scientists have been able to ship and store human organs for organ transplants on ice, but they are not able to be frozen yet. If there is something to be gained by researching wood frogs, it is the role of cryoprotectants in improving survival from freezing.

The evolution of being able to survive cold winters by freezing is an incredible adaptation to surviving tough times. Throughout the past 400 million years of their evolution, many groups of amphibians have managed to survive many mass extinctions because of their extreme adaptability, and hopefully they will be able to survive the extreme changes in climate in the years to come.